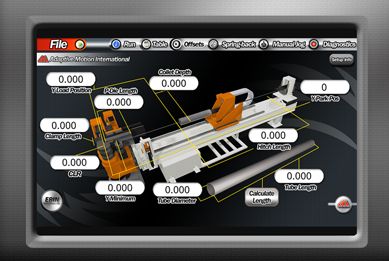 ‘How to Stop Wasting Money’

Upgrade and Future-Proof Your Existing Machines.

All too often, CNC / NC Tube Bending machines are discarded for the simple reason of no support for old, often proprietary control system hardware and software. Mechanical elements such as bearings, bushings, linkages, gears, ball-screws, and hydraulics are easily repaired or replaced.

‘But the Electronics are Not!’

Have you ever lost production simply because you had problems with a touchscreen, a disk drive, a monitor, a keyboard failure, etc.? All the faults of 20th century technology. It is true that some companies have attempted to adapt standard machine-tool CNC’s to Tube Bending machines but tube forming is a highly specialised process and G-code programming (still found on many machines) does not relate to Lengths, Rotations and Angles (LRA’s), not to mention the handling of Automatic Spring-back Compensation, Multi-Stack tooling, Carriage Boosting, etc., etc.

What you need is a 21st Century Solution

A fully tried and tested Upgrade and Future-Proofed System with

Where it all began!

In 1987, Craig Webster created the very first all-digital-motion CNC control system, specifically for tube bending. This was also the first ever to feature the very robust capacitive touch-screen technology and graphical user interface (GUI). The customer was, at the time, the world’s No:1 car producer. In 1988, we were contracted by Pedrazzoli, Italy’s No:1 CNC Tube Bender producer to bring this technology to their line of CNC Tube Bending machines which resulted in 100+ units per year. In 1993, Pines, the inventor of the CNC Tube Bender, decided to switch from their own in-house developed control technology to ours. Today, we are often copied but never equalled. We have the features and flexibility to accommodate any existing bending machine with any number of CNC axes, be-it a standalone machine or integrated with robot load/unload and other work-cell apparatus.

packages are as follows:

To replace the existing CNC / NC controller, including the main CNC processor module, I/O expansion PLC, HMI (human-machine-interface), once self-Installation is complete, calibration, and de-bugging, including operator / maintenance training is completed via TeamViewer by a qualified Phenix engineer. All electronics to be COTS (Commercially available, Off-The-Shelf)

To include the Bronze Package plus new electronic Servo-Drives (amplifiers). In the event of a failure, the obsolete drives are ‘possibly’ repairable by any number of drive-repair houses, but this can be expensive in terms of both money and machine down-time. Five to eight weeks repair turnaround is not unusual.

To include the Bronze and Silver packages plus new Servo Motors. Many older machines were fitted with brush-type, DC motors whereas newer machines are fitted with the more reliable and better performing brush-less motors.

To include the Bronze, Silver and Gold packages plus new sensors throughout the machine; limit-switches (proximity and mechanical), encoders, etc.